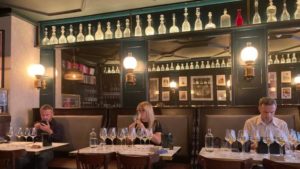 Five years ago I took part in a blind comparison of six English sparkling wines and six champagnes, all hand-picked by publishers and restaurateurs, the Noble Rot team. The shock result then was that on the basis of the total scores of 13 tasters, some of them French, England ‘won’, as reported in English fizz trumps champagne in blind tasting.

Dan Keeling and Mark Andrew of Noble Rot decided it would be a good idea to repeat the exercise, this time with a dozen wines from each country. The tasting also nicely coincided with the opening of Noble Rot Soho, a second branch of their original wine bar and restaurant in Lamb’s Conduit Street, in premises that once housed the famous Greek Street restaurant The Gay Hussar. After the tasting we were treated to the first-ever meal served to outsiders by the new team. Choux bun with duck-liver parfait and Tokaji jelly; black figs, tomatoes and salted ricotta; and a nostalgically Hungarian game-stuffed cabbage and sour cream went down very well with various Chablis and a magnum of Ch Grand-Puy-Lacoste 1982 brought by M. Browett.

The long, narrow ground floor lent itself well to social distancing. Each of us tasters – fewer of us this time – had the secure luxury of a table to ourselves. Above are three of those opposite me, left to right: Stephen Browett of Farr Vintners, Katie Exton of Lorne restaurant and Neal Martin of Vinous.com.

Noble Rot’s head sommelier Josh Castle was in charge of serving the wines randomly in four flights of six, in the order shown below, so that none of us, Keeling and Andrew included, had any clue what was what. The wines were chosen by the Noble Rot team on the basis that they were all under £100 a bottle. (There are some pretty expensive English fizzes nowadays.) Only two of the 12 champagnes were from houses – non-vintage blends from Veuve Clicquot and Pol Roger. The rest were grower, or single-estate, champagnes from some of the producers favoured on the Noble Rot wine list, and varied in age from a 2010 from Agrapart to Jérôme Prévost’s Les Béguinesblend based on 2017. The English wines spanned exactly the same period and were the top 12 from an earlier blind tasting of 40 English sparkling wines undertaken by the Noble Rot team.

The thing that struck me most forcibly about the range was the massive variation in sweetness and apparent acidity. I tended to assume the wines that seemed tarter than most were English – though I’ve had many a tart Extra Brut champagne in my time, come to think of it.

The provenance of each wine was more or less obvious, suggesting that English sparkling wine has really established its own perfectly valid style, rather than being a copy of champagne. I should add, though, that I thought the Westwell, Pelegrim NV could be a very young champagne and I took the remarkably evolved Gusbourne, Blanc de Blancs 2014 for a champagne.

My two favourite wines were both champagnes: the Larmandier-Bernier Terre de Vertus that was the group’s overall favourite wine (from an estate that has been biodynamic for 20 years) and the Michel Gonet that is apparently the Noble Rot house champagne. (So tactful!)

The wine from another champagne grower championed by Noble Rot, Ulysse Collin, whose wines I had tasted with them and with Olivier Collin, as reported in Tip-top grower champagnes?, disappointed us.

I liked Davenport, Limney Estate 2014 in which I identified a strange aroma that reminded me of concrete, but it was widely disliked by my fellow tasters.

Once all the scores had been added up, Champagne triumphed overall with a total of 1,945.5 points to England’s 1,895.5, so it was pretty close. Hambledon, the ‘winner’ five years ago, tied for second place with Pierre Peters. In third place overall was the Blanc de Noirs 2015 from Harrow & Hope, a relatively new enterprise established by Tony and Barbara Laithwaite’s son Henry and his wife Kaye. It may well be significant that when this wine was made they would have been advised by the late Tony Jordan, the Australian sparkling winemaking genius who set up Domaine Chandon in Yarra Valley.

So top places overall went to:

These 24 wines are presented in the order tasted but you can reorder them if you wish, using the menu below.

Tasted blind in a comparison of champagne and English sparkling wine. 100% Chardonnay.
Quite deep gold. Lightly savoury nose. Some evidence of autolysis and real age suggests champagne. Fine mousse and the acidity is not too aggressive. Not too dry either (in fact, it tasted as though there had been some dosage). Relatively complex. Serious champagne?